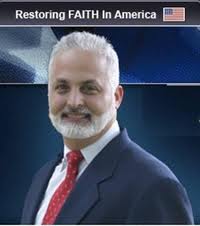 (BERRYVILLE, VA) – Embracing the values espoused by our nation’s Founding Fathers, Virginia husband, father and small businessman Pete Grasso formally announced his campaign for the Presidency in 2008 with a plan to restore FAITH in America.

It is time for people of faith to stop compromising on issues of moral clarity and integrity in their leadership, and to support candidates who conduct themselves according to these very same principles that were seen in the character our founding fathers.

“I have watched with dismay as candidates from both major parties sell out Christian American values and priorities in the name of partisanship,” Grasso observed. “Our nation is losing its way, and we can only emerge from the darkness by returning to the basic tenets used to create this great nation.”

Grasso is a retired military officer with more than 25 years with the Air Force, Air National Guard, and Air Force Reserves. Currently, as a Senior Project Manager, he oversees programs in the Department of Defense, Biomedical, Light Manufacturing, and Defense Contracting. He also provides services for more than 15,000 customers a year at his ‘Trinity Express Lube’ automotive business in Winchester, VA.

Grasso, the author of In God We Betrayed,a book that examines the importance of God in America, lives with his wife, Debbie, and their two sons in Northern Virginia.

In deciding to run as an independent candidate, Grasso believes that neither political party holds all the answers, and that ongoing partisan fighting along with organizations like the ACLU are tearing the nation apart. Grasso noted that good ideas can be found throughout the political spectrum, provided they are rooted in God’s wisdom and guidance.

“For far too long, people of faith have compromised their beliefs by voting for those who refuse to fully embrace a Biblical view of political life,” Grasso commented. “It is time for people of faith to stop settling for less than a full embrace of God’s teachings, and to support candidates who conduct themselves accordingly.” 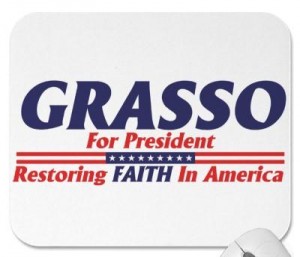 Grasso’s platform is firmly rooted in Christian teachings. He expressed a desire to increase accountability and consequences for judges who circumvent the Constitution according to their own ideologies in order to legislate from the bench.

“Unfortunately, secular humanists, aided and abetted by the ACLU and a sympathetic court system, are succeeding in driving a wedge between God and our country,” Grasso stated. “The ACLU is the ‘Enemy of the State,’ and I will be the one candidate unafraid to make that proclamation.” (Review ACLU Audio Message: Windows Media 42Megs)

Grasso acknowledged the challenges faced by an independent campaign, particularly in a cycle notable for the record amounts being raised and spent by major-party candidates. However, Grasso stressed his campaign is different from the rest, with an emphasis on ideas, values and a commitment to re-focus the nation on results-oriented solutions to our most challenging problems.

“Now more than ever, America needs fewer politicians and more patriots who embrace the biblical perspective on life and its value in the founding and guidance of our nation,” Grasso said. “That is why I have decided to join this race. Together, we can restore FAITH in America.”

“Now more than ever, America needs fewer politicians and more patriots who embrace the biblical perspective on life and its value in the founding and guidance of our nation,” Grasso said. “That is why I have decided to join this race. Together, we can restore FAITH in America.”

“He who shall introduce into public affairs the principles of…Christianity will change the face of the world.”